Metro station “Taganskaya” (Таганская) in Moscow is located at a distance about 2.3 kilometers to east from the Kremlin and Red Square, near the “Taganskaya” square. “Taganskaya” metro stations are located on two lines of the Moscow Metro, on the “Koltsevaya” line (Circle Line) and “Tagansko-Krasnopresnenskaya” line. Stations halls are connected by the transition between, as well as the station “Marxistskaya” of Kalininsko-Solntsevskaya line. Stations form an interchange hub and allows make a transfer between three metro lines. 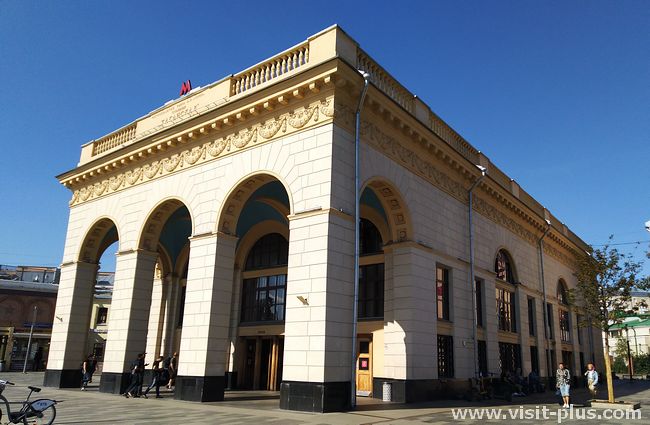 Underground station hall is located at a depth of 53 meters below the ground surface. Diameter of the station central hall is 9.5 meters. At the southern end of the hall is transition to the metro station “Taganskaya” of Tagansko-Krasnopresnenskaya line.
(Previously, in this place was located a sculpture depicting Joseph Stalin. Later composition was replaced by a portrait of Lenin, which also has not survived to the present day.)
Exit from the station consist two consecutive escalator slopes, which are separated by an intermediate hall. Station lobby is located to west from the “Taganskaya” square, at the intersection of the “Sadovoye Koltso” (Garden Ring), “Verhnaya Radischevskaya” street and “Nizhnaya Radischevskaya” street.