Black Sea coast is the most popular resort region of the Russian Federation. This is one of the few places on the sea coast, suitable for summer holidays on the territory of Russia. A large number of tourists from many regions of Russia come to the resorts of Krasnodar Region and Crimea every year. Many peoples in Russia prefer to spend their summer holidays on the Russia Black Sea coast, despite the popularity of resorts in countries such as Turkey, Greece, Spain or Thailand.

The city and the beaches, which are located in the Krasnodar region and the Crimea peninsula are the most popular among Russian tourists. The Black Sea coast in Bulgaria is popular with tourists from European countries.
We advise you to take a closer look at Georgia too, if you intend to spend a vacation on the Black Sea. The best sea resorts of Georgia are located in the city of Batumi. Length of the Russian Black Sea coast area in Krasnodar region is about 400 kilometers (straight-line distance of about 350 kilometers). The most popular resort towns of Russia are located in this area: Anapa, Gelendzhik, Tuapse, Sochi. Crimean biggest cities are Sevastopol, Simferopol, Kerch, Evpatoria, Feodosia.

The peak of the tourist season in most parts of the Black Sea coast of Russia lasts from June to September (inclusive).

Unfortunately, there are many beaches that belong to the hotels and access of tourists is closed or possible for money on the territory of the coast. (Unlike many popular tourist countries in which the seaside is available for everyone.) 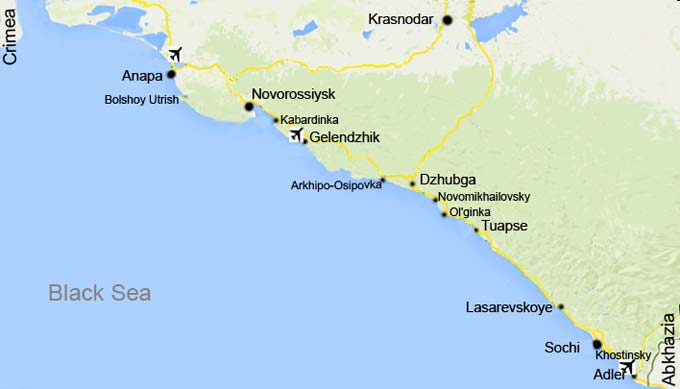 Russian part of the Black Sea coast is located in areas of the Mediterranean and subtropical climates. The climate of the region is greatly affected by the Caucasus Mountains (mountains protect from cold northern winds) and the sea (the sea make the air a few cools in summer and warm in the winter).

Sochi is the most popular and the largest resort city in Russia. Municipality of Sochi is also known as Greater Sochi. The coastline in the Greater Sochi has a length of over 100 kilometers. Municipality of Sochi city is divided into four districts: Central District (Sochi), Adler district, Lazarevsky district and Central district. Big Sochi resides more than 445,000 people. Among the well-known holiday destinations in the Greater Sochi can be called Dagomys, Lazarovsky, Adler. Beaches near the town of Sochi almost all pebble. In the mountains, near the village of Krasnaya Polyana, popular ski resorts are located. The best time of year to visit the city of Sochi for beach lovers is from June to October.
You can come to Sochi by rail or by car. In the city of Adler is a major international airport that receives flights from many cities of Russia.

Anapa is located in the northwestern part of the Black Sea coast of Russia, near the Crimea and the Sea of Azov. Distance from Anapa to Moscow is about 1690 kilometers, 170 kilometers to Krasnodar, to Sochi to 360 kilometers. Black Sea coast in the region of Anapa is considered as one of the best family vacation destinations on the territory of Russia. Many of located here beaches are sandy and gravel-sand, have flat bottom and are well suited for families with children. Water in places well heated. The swimming season in fine weather can last from May to October.

Near Anapa (in sea lagoon on the Grand Utrish) is the only Russian Black Sea coast dolphinarium, which contains marine mammals and act in vivo (running in seawater on the open air). (Utrish Dolphinarium has branches in other cities, such as St. Petersburg.)

Tourists in Anapa often commute by train, by car or by air. In Anapa are located a major airport and railway station. Rail trains to Anapa go during the tourist season (winter trains to Novorossiysk).

Gelendzhik is located on the Black Sea coast in “Krasnodarsky Kray” region of Russia. It is located about 70 kilometers southeast of the city of Anapa. This is one of the most popular summer resorts in Russia. Resident population of the city is about 61,000 people. The peak tourist season lasts from June to September. The sea temperature may be favorable for bathing in good weather from May to October. Most of the natural beaches covered with pebbles. In the center of Gelendzhik Bay has an artificial sandy beach about 1 kilometer long.
There is an airport in Gelendzhik. The nearest railway station is located in the city of Novorossiysk.

Tuapse city is located on the coast of the Black Sea, at a distance approximately 80 kilometers north-west of Sochi. The city's population is about 63,000 people. There is a major seaport and railway station.

Novorossiysk city is located on the coast of the Black Sea, Tsemess Bay (Krasnodar region). The city's population is more than 251 thousand people. Novorossiysk is an important transport hub in the south of Russia. The city is a major port, railway station, site roads node (road M4 “Don”, Moscow - Rostov-on-Don - Novorossiysk).