Metro Station “Sportivnaya” (Russian: Спортивная) is located in the central part of St. Petersburg, on the “Petrogradskaya Storona” district, near the "Petrovsky" stadium. The station is located at “Frunzensko-Primorskaya” Petersburg metro line (Purple Line), between stations "Admiralteyskaya" and "Chkalovskaya".

The metro station “Sportivnaya” was opened September 15, 1997. There are two major sports places near the station: Stadium "Petrovski" and the Palace of Sports "Yubileyniy". It explains the choice of the station name. Sports theme is used in the station design. "Olympic flame" mosaic is located in the hall. Station is located at 64 meters depth under ground level.

The station does not have a separate ground entrance pavilion. Entering to the station lobby is through an underground passage. Entrance to the station is located at the “Bolshoy Prospekt PS” and “Dobroliubov” streets intersection.

Metro Station also has access to the Vasilevsky Island. Entrance is located on the square in front of Tuchkov Bridge.

Sportivnaya is double-decked station. The floors are connected by two escalators (lifting height 6.6 meters). The lower floor serves the southbound trains while the upper floor serves the northbound ones. The upper floor is linked to the stations with exit only, which leads to south-eastern side of Petrogradsky Island. The lower floor houses an entrance to a transfer corridor which links the station to the exit on the north-eastern side of Vasilyevsky Island. 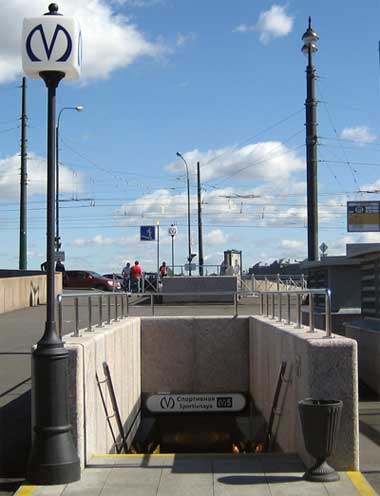 The entrance to the subway station Sportivnaya on Vasilyevsky Island is shown on the picture.

Transfer corridor to the lobby on Vasilevsky Island is equipped with a travelator. All equipment was made in the city of Hamburg (Thyssen Krupp Elevator).

The station will be an interchange node between two metro lines, if “Koltsevaya" (Ring) line of St. Petersburg metro will be built.

You can find out the stations and lines location on the map.