Warning!There are many pickpockets in the subway. They prefer the station with lots of passengers, transfer stations, city center. Be careful! Keep money, documents and valuables out of reach of thieves.

Metro fare can be paid with a token (zheton) or a rechargeable, contactless card. St. Petersburg metro ticket price is (2021) 60 rubles (or about 80 cents) when you pay with a token or 41 rubles when you pay with a Podorozhnik-card (2021). It is possible to buy card or a single ticket - "Zeton" (Жетон) in ticket office. Ticket offices are located in the hall right after the entrance to the metro station. There are also vending machines for buying and replenishing transport cards.

"Podorozhnik" (Подорожник) is the most popular (and convenient for tourists) transport card. (It’s more profitable to pay with the “Podorozhnik” card if you plan to use public transport often.)

If the passenger has the big bag, he must buy another token for it. If you plan to travel by public transport a lot, it may be more convenient to buy a card (Podorozhnik card). Money must be loaded to the card to use it. Options are available to pay only on the subway or a different mode of transport (metro, bus, trolley bus, tram). After entering the metro you can leave the underground carriage and go into it, change the lines without limitation.

There are many alternatives, how to use the "Podorozhnik" card (Подорожник). Using format should be selected when loading money to the card from ticket sales.

There are the gates through which passenger go to the escalators in the halls. The gates have smart card reading devices and gaps for tokens. Drop the token into the slot on the right side of the aisle. When the machine detects the the payment and the light turns green you can go through gate to escalators. Outside port is wider and larger for exporting goods.

Information about the Saint Petersburg Metro

Some information about the history of the subway in St. Petersburg

The first project of underground transport in St. Petersburg was proposed at the beginning of the XIX century. In 1820, a proposal engineer Torgovanov about construction of a tunnel under the Neva river was sent to the Emperor Alexander I. Emperor wrote his resolution on the proposal: "Give to Torgovanovu 200 rubles and require not continue to do any projects."

The first practical steps for the construction of the subway in Leningrad were made in 1939. During World War II, construction was halted. Work on the construction of the subway restarted again in 1945. October 7, 1955 launch the first tasting train. The grand opening of the first metro (subway) line in St. Petersburg was held November 15, 1955. Underground construction continued throughout the following years. In 2011 was opened metro station "Admiralteiskaya", which is located near the Palace Square and other main sights of the city. It is very useful for tourists.

In 2018, the Novokrestovskaya and Begovaya metro stations were opened, which are closest to the new football stadium, the 300th Anniversary Park of St. Petersburg and the Lakhta Center. Three metro stations (Prospekt Slavy, Dunaiskaya and Shushary) were opened in the south of the city in 2019.

Metro station "Teatralnaya" planned to open later. It will be located near “Mariinsky” theater.

The nearest metro stations for some places 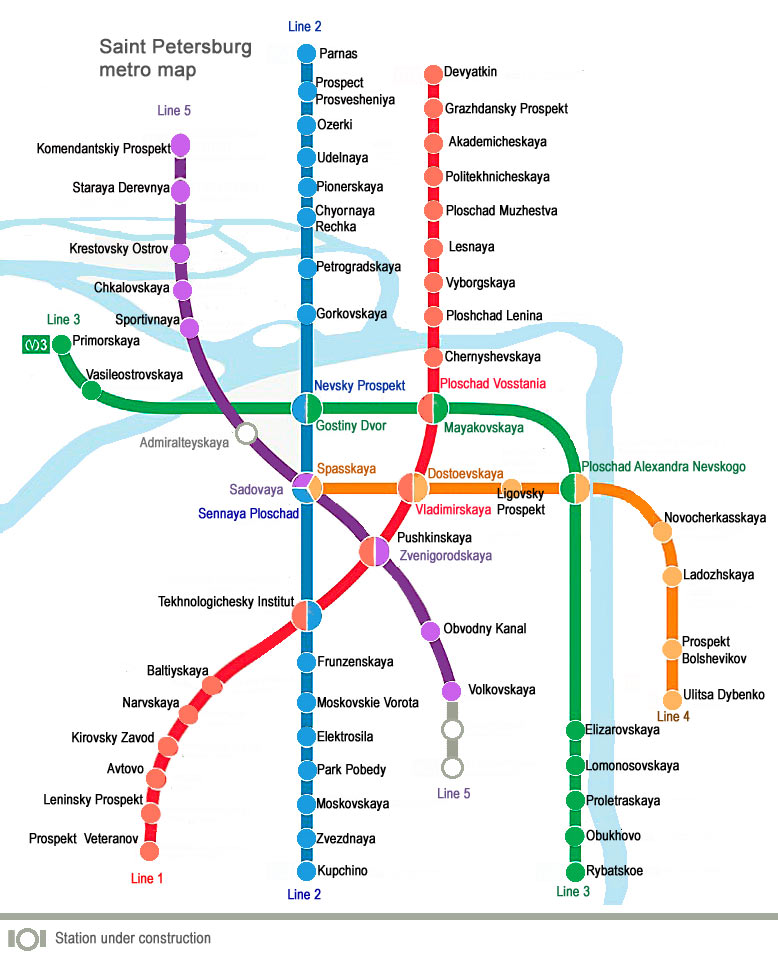 Start from this page - more information for travelers.

You may also be interested in: Moscow metro guide.