The main attraction of Tallinn is its “Old Town” (Vanalinn). Tallinn Old Town is included in the UNESCO World heritage list. It is one of the best preserved medieval cities in Europe. Architecture of the old town was formed from the XI to XV centuries. It has not been badly damaged during the wars and fires. Massive construction works have not been produced here in the modern times. Most of the city houses and streets remained without significant changes. Most parts of the city walls are also preserved.

If you like to wander through the streets of the medieval cities, to look on the old houses, you will surely enjoy the Old Town of Tallinn.

Old Town is located in central part of Tallinn, close to the sea port and close to the central railway station of Tallinn. Old Town has a small area and it can be easily got around on foot. The length of the Old town from the north-east to south-west (from the Great Sea Gate to Freedom Square) is about 1 kilometer and from the north-west to south-east (from the “Toompark” park to Viru Gate) is about 550 meters.

Find out the location of attractions, shops, hotels and other places in Tallinn on the map.

Tallinn's Old Town is divided into two parts: the “Upper Town” (Toompea) and the “Lower town”. These were the separate administrative units and managed by independent authorities in the middle ages. Aristocracy and officials were living in the upper town. The lower city was home to merchants and artisans. Estonian population for a long time lived outside the city walls. Only in the late 19th century, the Upper Town became part of Tallinn. 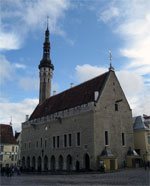 Tallinn City Hall was built in 1402 - 1404 years. It is believed that this is the only built in the Gothic style, fully preserved City hall in Western Europe. Weathervane was installed at the City Hall tower in 1530. It was made in the form of the city guard. The "Old Toomas" (Vana Toomas) weathervane image is currently one of the symbols of the city. (There is a copy of the wind vane located on the steeple now. The original is kept in the town hall.)
Address: Raekoja plats 1, Tallinn, Estonia.

In the Middle Ages, the ships were the main mode of transportation connecting Tallinn with other cities. The harbor is located near the old town. Great Coastal gate were the main entrance to the city in the middle ages. The gate was built during the construction of the city wall. A powerful tower was built near the gate to protect them from possible attack at the beginning of the 16th century. The tower has a diameter of 25 meters and a height of 20 meters. It is significantly different from the other towers of the Old Town and was nicknamed Fat Margaret. The tower has 155 loopholes for guns. Maritime Museum of Tallinn is currently located in the tower. There is an observation deck on the top of the tower.

St. Olaf Church (Oleviste) is the first thing you see coming up to the Old town. Church of St. Olaf is most conspicuous building in the Old town of Tallinn. St. Olaf church’s tower has a height 124 meters and is visible from many parts of the city. From 1549 to 1625 years this church was the tallest building in the world! 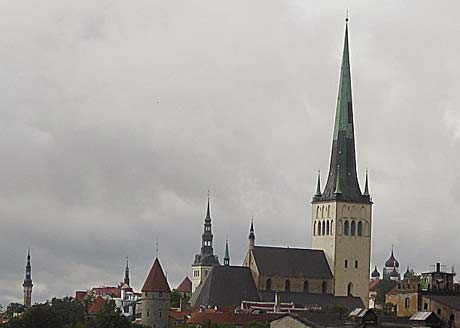 There is a viewing platform for tourists on the tower of the church at a height of 60 meters. Tower observation deck offers a beautiful view of Tallinn, the Old town, the sea and the passenger port. A narrow, steep stairs is leading to the observation deck. It is difficult to pass at the same time two people on the narrow stairs. It will be difficult to rise to the tower for the elderly and overweight people.

It is easy to walk to the Oleviste church from Town Hall square along Pikk Street or from Great Coastal gate. The church is located in the northern part of the Old Town.
Address: Lai Street 50, Tallinn, Estonia. (Find out the church location on the Tallinn map.)

The upper town is part of the Old City. The upper town is located in the south-eastern part of the Old Town on the Toompea hill (Cathedral hill). Toompea has dimensions approximately 400 by 250 meters, an area of about 7 hectares. The hill rises above the surrounding terrain up to 20-30 meters. The most interesting objects in the Upper Town are Toompea Castle, the Dome Cathedral, Alexander Nevsky Cathedral and viewing platforms for tourists.

It is possible to go to the Old Town walking along the Ahtri streets. The area of the old city is partially enclosed by fortress wall. It is most convenient to walk to the Old Town territory from the port, for example, through the Great Coastal Gate (walk along the boulevard Mere right) or through Viru Gate (go along Mere boulevard to the left).

The train station is located next to Tallinn's Old Town. It is possible to walk from the station on the territory of the old city by Nunne street.

Many tourists think that it really worth to come to Tallinn to visit the old town. This is a place we recommend to tourists.

Where is it located in Tallinn? Find out the location of tourist spots on our city map.