My trip to Italy

This trip was not in the plans. But two things coincided. Two weeks holiday in February. Travel firm offered very cheap trip to Italy. A trip to Italy from St. Petersburg for 7 days cost for two adults only 30,000 rubles (including excursion program). Probably we should to go.

Italy is one of the most attractive tourist destinations in Europe. Here you will find many interesting places, interesting sights. Everyone from childhood knows names of cities such as Rome, Florence, Venice, Milan. Should I go to Italy in the winter, in February? At this time in northern Italy is not the best weather. The air temperature ranges from 0 to 15 degrees. There is high probability of rains. But the price of a trip to Italy in this time of year is much lower.

A short program of the trip: arriving to Rimini, a day trip to Venice, the next day stay in Rimini (trip to Milan is possible), after which travel to Rome trough Florence, a few days in Rome (a city tours, visit to the Vatican museum), then return to Rimini and the next day back to Russia.

Italian “Livingston airlines” airplane gets as from Saint Petersburg to Rimini. The flight took about 3 hours. We immediately went on first tour in San Marino after arrival to Rimini.

San Marino is a small, independent republic, surrounded on all sides by Italian territory. It is located on Mount Titano. The most important attractions of San Marino are its three towers (fortress, castle). It is believed that San Marino is a good place for shopping, but we saw nothing special range of products, or especially low-cost prices in shops there. There are not a lot of tourists in winter, and some stores (especially in bad weather) may be closed (as well as in Rimini).

We were invited to taste local wines and liqueurs in a shop located near to the bus stop. The proposed for tastings wines really liked. You can try to choose the wine you want and then buy it there.
There was a small frost and even some places were covered with snow in San Marino. You can see a snowdrift on the square on one of the photos. You can get to the mountain also by cable car. Near the top station of the cable car is a monument to the victims of the bombing, which was conducted by the UK aviation during World War II. After a tour of San Marino we go to hotel.

“Gemini” 3-star hotel is located at a distance about 4 kilometers from the center of Rimini, near the sea coast and not far from the Rimini airport. There are many small shops, restaurants, cafe and hall with slot machines near the hotel, on the “Viale Regina Margherita” street. There is a bar in the hotel. The hotel rooms are very small, with old TV. TV shows good only one channel in Italian. The room has a shower and toilet. There are rooms of various size (from very cramped rooms to the rooms is quite suitable size).

The main bad property of the “Gemini” hotel is lack of the Internet access. Most people absolutely need to have every day opportunity to send and receive e-mail, get the necessary information (including information about places visiting during travel). Also in the room was a little cool, and air conditioning remote control was not in the room (it was on reception desk). The hotel does not offer very comfortable living conditions, but there are all you need (shower, toilet, restaurant) to spend the night in a hotel.

An interesting observation on the subject: “How to dress women in Italy”?
Italy is a country located in Southern Europe. However, it seems that women like to wear fur in Italy! For example, in Finland, in Northern Europe, you rarely saw a woman in a fur coat. If you saw a woman in expensive fur coat in Finland, it is (most likely) a tourist from Russia.
In Italy is the warm climate and the fur is not needed. But I have often seen women in fur coats during a trip to Italy. During our stay in Rome (February 2013), the temperature reached 12C degrees in the shade. We have seen women in the expensive mink coats very often.

A trip to Venice was in plan forn Sunday 10 February. After breakfast in 06:00 all tourists went to the bus. Trip by bus from Rimini to Venice takes about 3 hours. The air temperature was around zero degrees. There was fog. In some places along the road was snow! Maybe it was the coldest day in northern Italy this winter!
We arrived in Venice, and went to the boat, that took us to the city center to the Piazza San Marco square. During the trip the fog went away and the sun began to shine. The whole day was a nice, sunny weather. 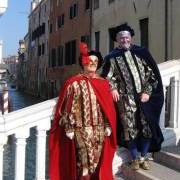 As it turned out, we arrived in Venice at the famous Venice Carnival time! This is the most significant event in Venice. A huge number of tourists is in the city these days. A lot of people dressed in costumes and carnival masks walk on the city streets. Masks are bought and wearing many tourists. Masks and souvenirs are available in all places in the city center. Cheapest mask cost from 5 to 30 euros. A live music play in many places on Venice during the festival.
You can take photos with dressed in carnival costumes peoples (it's free), or buy a mask yourself and become a participant of the festival.

We visited Venice during the carnival on Sunday. There were so much people some places in Venice so in it was difficult to go on this day. All restaurants and cafes in the city center were full. There was no famous pigeons on St. Mark's Square, they have not had free place.

The first point on our guided tour in Venice was a glassblower's workshop. Master made a glass horse in just a few minutes in front of our eyes. You can buy beautiful glass items in the store, which is available next to workshop. Exactly the same is sold in other stores in Venice and in many shops in Rome. After the glass blower workshop we have a walking tour in Venice which organized a local tour guide. Then it was a few hours of free time.

It was a beautiful day in Venice. We had a great time. But it was not enough for us one day for a visit to Venice only.

The next day, Monday, we had a free day in Rimini. (It was possible to go on a trip to Milan, but we refused.) Weather was cool at this day. The temperature in the morning was about zero degrees. We went from the hotel to the city center by foot. There are many different shops and cafes on the street (which runs along the coast). Stores sell a wide range of products for tourists at affordable prices. Bus line number 11 run along the street. There is a “Conad” supermarket (where you can buy a food) next to the bus stop number 14 (all bus stops is marked with a number).

Strolling along the Rimini city center took a few hours. During this time, we saw some of the sights: Tiberius Bridge, Arch of Augustus, the ancient Roman amphitheater (admission to amphitheater area was closed).
The afternoon was reserved for shopping. Local residents advised shops on the “Corsa D'Augusto” street (in the city center, which extends from the Tiberius Bridge to Augustus arch), and the shopping center “Le Befane”. A shopping center can be reached by bus number 8 from the center of Rimini.

“Le Befane” shopping center is located on the distance about 3 kilometers to south of the city center. A very wide range of footwear is in the “Pittarello” shop on the ground floor.

The bus went to Florence in early Tuesday morning. The air temperature was about five degrees, sometimes was a rain. The bus trip from Rimini to Florence took about three hours. We went out of the bus in the city center, and went to the main city attractions, “Santa Maria del Fiore” cathedral. From cathedral began a city tour with a local guide. Guide (whose name is Jordanka), such as many Italian women, was wearing a mink coat. Our guide told us that Florencia held a lot of the world's art masterpieces. And also, that “in Rome you can see only ruins, but here, in Florence, all is in good conditions”. In Florence we had the opportunity to visit the famous “Uffizi Art Gallery”.

After a walking tour were a few hours of free time. We were able to walk around the city center, to eat (there are many restaurants and cafes in the city center), and to go shopping. There are sales in Italy in February and many goods can be purchased in low price. Shops in Italy (and in Florence) have a wide selection of women's leather shoes and handbags. Most popular places to visit for tourists in Florence are: the famous “Santa Maria del Fiore” cathedral, “Ponte Vecchio” bridge, “Wild Boar” fountain, “Piazza della Signoria” square, “Uffizi” art gallery.

We took the bus from Florence to Rome. The trip to Rome lasted a little over three hours. Our group was taken for tasting to the shop, which sells sauces, spices, and many other goods during the trip. At testing were some sauces, Italian wines and liqueurs. The most exotic sauce was made with the addition of the truffle fungus. I never thought I will have opportunity to try it (the truffle is a very expensive product).

Company, where you can taste the truffle, called “Etruria”. The company sells its products with white and black truffles, olive oil, olive oil products, cosmetics, sauces, wine. The factory and showroom is located close to the A1 motorway, at a distance about 100 kilometers from Rome. The company has department in Rome.

To hotel in Rome we arrived late in the evening.

See the next page.