To Stockholm from St. Petersburg via Helsinki

What is the best mode of transport to get to Stockholm? Airplane? A train? In my opinion, it is best to travel by sea, by ferry or by cruise ship. A trip on a comfortable boat is a pleasure in itself. I visited Stockholm recently by ferry.

I visited Stockholm for the first time many years ago. A good reason to make a trip to the capital of Sweden once again appeared with me recently. What is the reason? Cheap ferry tickets.

I live in St. Petersburg now and there are two types of transport options to get to Stockholm: by plane or by ferry (via Helsinki or Tallinn.).
The ferry goes longer, but the ferry ride itself can be enjoyable.

The easiest way to buy a ferry ticket is one of the ferry companies: Tallink Silja or Viking Line. They operate flights to Stockholm from Helsinki, Turku and Tallinn. The Baltic Sea cruises with a visit to Stockholm, Helsinki, Tallinn and St. Petersburg are organized by Moby SPL company (St Peter Line). But Silja Line and Viking Line are more popular among residents of St. Petersburg. 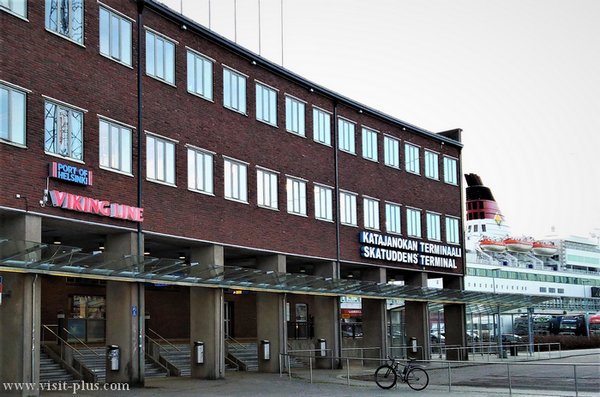 Our trip to Stockholm schedule (November 2019):

There may be different ferry tickets. It can be a one-way ticket or a round trip. You can arrive in Stockholm, spend one day in the city and head back in the evening. You will spend about 6 hours in Stockholm.
You can buy tickets to Stockholm and back for different dates. (Book a hotel room and spend more time in the capital of Sweden.)
Ferry means that you can take your car with you. You can make a more interesting route. For example: go to Stockholm from Finland and return through Tallinn. But it will cost significantly more.

Do not mistake: Ferries to Stockholm usually depart from the South Port (Eteläsatama). There is also a Western port (Länsisatama) in Helsinki. Some cruise liners stop there and some ferries leave for Tallinn. The distance from the city center (Mannerheimintie street and Stockmann department store) is about 2 kilometers.

The cost of cruises (round-trip tickets) very much depends on the season, day of the week and the chosen cabin. The cheapest tickets can be bought on Monday - Tuesday in the offseason.

The cheapest cabins are on the 2nd deck. They do not have windows, but otherwise are quite suitable for travel. Most travelers spend time in a cafe, bar, restaurant and casino. Several groups of artists perform every night on the ship.

The cost of our tickets was: cabin for two travelers round trip - 22 euros, bus tickets - (St. Petersburg - Helsinki - St. Petersburg) - 27 euros per person.

I traveled from Helsinki to Stockholm by ferry, but you can travel the other way (to Helsinki) if you want.

Tallink Silja Line and Viking Line ferries depart from the center of Helsinki. Their terminals are located on different sides of the bay, at a distance of about 800 - 1000 meters from the Market Square. (Viking to the left, Silja to the right. Viking Line ferries are colored red, Silja ferries are blue and white. You will see them from the promenade.) The Viking Line terminal is also called Katajanokan terminaali and at Tallink Silja Line (to Stockholm) is Olympiaterminaali.

Tallink Silja's terminal is approximately 6 kilometers from the Old Town in Stockholm. (You can order a taxi.)

Viking Line ferries arrive almost in the center of Stockholm. The distance from the terminal to the Royal Palace is approximately 2 kilometers. (Walkable.)

The ferry trip itself can be considered as an additional pleasure in addition to visiting Stockholm. It should be especially interesting during the white nights, but we were traveling in the fall.

We traveled to Stockholm with the Viking Line Gabriella ferry. There are several cafes / bars / restaurants on the ferry. Most of all are on the 8th deck. There is also a buffet breakfast and dinner.
Information desk and Taxfree shop - on the 7th deck. At the information desk, you can exchange euros for Swedish kronor and the remaining crowns for euros.
On the 9th deck there is an open deck for walks and a bar. Sauna is on the 6th deck.

Price when ordering in advance (2019): breakfast - 11 euros, dinner - 35 euros.
The restaurant overlooks the sea. (Take a seat by the window in advance.)

In the evening, several groups of artists performed in cafes and restaurants (during our trip): dancing, songs, and a disco at night. 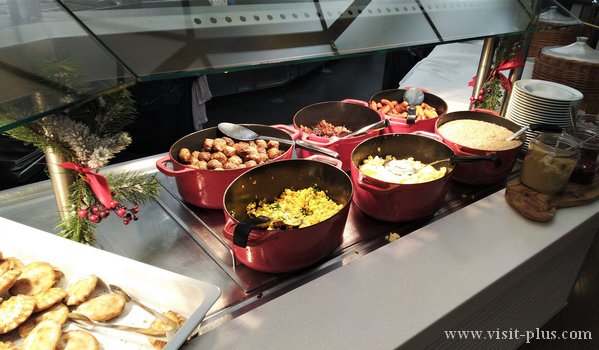 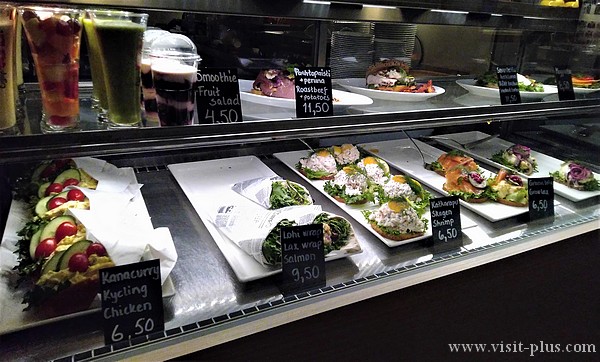 In one of the cafes: coffee - 2.8 euros, a glass of boiling water - 0.5 euros. A large Chinese character is drawn next to the price of boiling water. As they say, Chinese tourists definitely need hot, boiled water.

What to do and where to go in Stockholm? Half a day is too little time to visit many places in the city. Therefore, the recommendation is simple: take a walk along the streets of the Old Town, go around the Royal Palace, be sure to walk along the embankments, pay attention to architecture, take photos.

The old city is located on the island of Stadsholmen and is connected by bridges to other parts of the city.

How to get from the Viking Line ferry terminal to Stockholm's Old Town (Gamla stan)? After leaving the terminal building, turn right, go straight 1.4 kilometers, and then right, across the bridge and you are already in the Old Town.

If you don’t go to the Old Town, but go straight ahead, you can walk to the Monteliusvägen walking trail. The trail and a small park are located on a cliff, near the shore. A beautiful view of Stockholm opens from there. You can get to this place along Bastugatan Street (800 meters from the bridge).

Turning from the bridge to the left will take you to the small Kornhamnstorg square. During our trip, there was a food pavilion and tables in the square. You can eat if there is no rain. A glass of coffee cost 15 crowns.

Walking a bit further you can walk to the Gamla Stan metro station. There is a supermarket in the underpass (enter the station).

There are many cafes and restaurants in the city center. Food in Stockholm is quite expensive, but during the day many cafes offer lunches at a price of 115 kroons and more.

If you go to the island and turn right, you get to the Skeppsbrokajen promenade. A very beautiful place. Walking along the promenade for approximately 800 meters, you will reach directly to the Royal Palace. 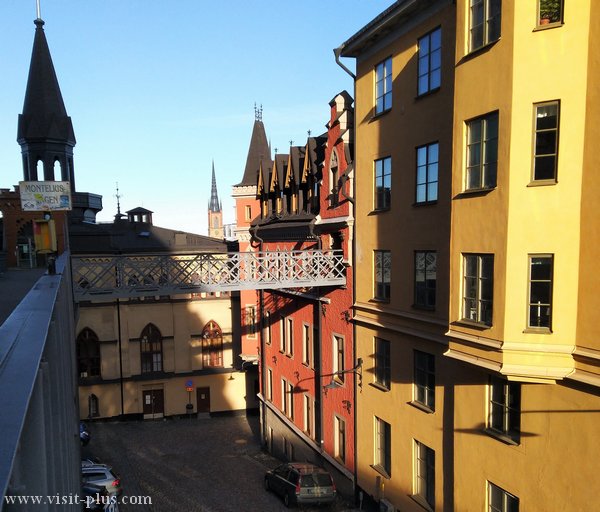 This may be what you need. There is a free, automatic toilet on the waterfront. Two toilets are nearby. One is completely free (closer to the palace), the second is paid.

Most public toilets in Stockholm are paid. Previously, a coin was needed to pay for the toilet, usually 10 kroons. Now there may be toilets that can be paid by credit cards or through a special application for a smartphone (I did not check how they work and how much they cost). Free toilets are in almost all cafes and museums (for customers). Toilet in the mall may also be paid. 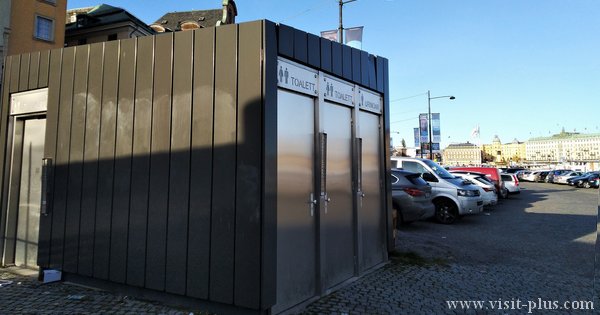 On the photo: free, public toilet in the Old Town in Stockholm.

The pedestrian street Drottninggatan is often called Stockholm's main shopping street. On this street and next to it there are many shops of famous, international brands. Gallerian Shopping Center is also located there. Many tourists include a walk in the area in their travel plans. (In my opinion, Stockholm is not the most interesting city for shopping lovers.

There is a small pedestrian street Sergelgatan near Drottninggatan. You will find some interesting sculptures on this street. 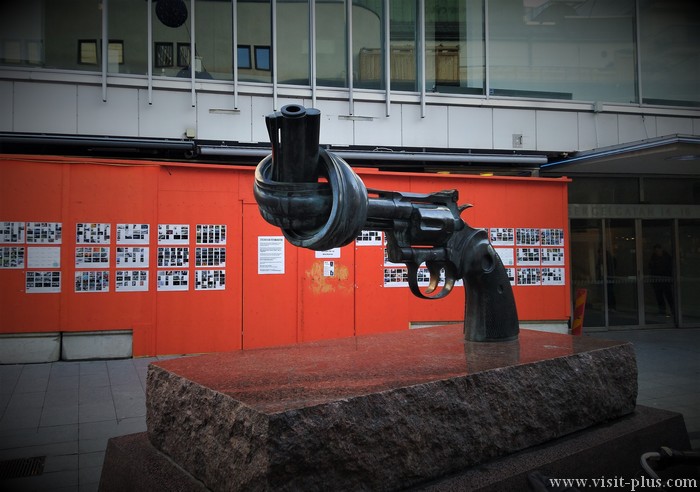 Shops of some well-known fashion brands can also be found east of this street, not far from Berzelii Park. For example, on Birger Jarlsgatan street there are shops Gucci, Chanel, Max Mara, Louis Vuitton.

About 6 hours is too little to explore the city. If you can afford it, it would be nice to take ferry tickets for different dates to spend at least one night and two days in the city.

Stockholm can only be the starting point of your journey.
It is not at all difficult to get from Sweden to other cities. For example: Helsinki, Tallinn, St. Petersburg.