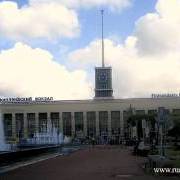 The station was opened in 1870. The station was serving Finnish railroad passengers that linked St. Petersburg and Rihimyaki station (Finland). The Finland Station building was built in 1960.

Allegro high-speed train goes daily between cities Helsinki and St. Petersburg. This is the fastest way to travel between the capital of Finland and St. Petersburg. Travel time is 3 hours 30 minutes. Trains run with stops at stations Vyborg, Vainikkala, Kouvola, Lahti and Tikkurila.

Finland Station is located on the right bank of the Neva River, near the Lenin Square.
Address: Russia, Saint Petersburg, Lenin Square, 6.
“Ploshchad Lenina” metro station lobby is located in the Finland Station building.
It is possible to get to city center from the “Finnland station” also by bus or trolley (eg, trolley number 3).