Finland is a relatively small country (in comparison with a nearby Russia) located on the north-west Europe. In terms of area, it is the eighth largest country in Europe and the most sparsely populated country in the European Union. A considerable part of its territory lies above the Arctic Circle (25%). It is bordered by Sweden to the west, Norway to the north, Russia to the east and Estonia to the south (over the Gulf of Finland). The south and west coasts of the country are washed by the Baltic Sea. Length of Finland coastline (excluding islands) is about 46,000 km. The coastal zone has a large number of islands. Great influence on the history of Finland had its neighbours - Sweden and Russia. Finland is an independent state since Dec. 6, 1917. The capital of Finland is Helsinki. Finland citizens call their country “Suomi”.

What attracts tourists to Finland? 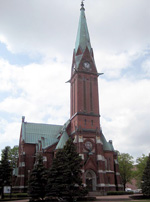 Which regions of Finland are the most popular among foreign tourists?

Helsinki is the most popular city of Finland. Turku, Tampere, Pori cities are also popular among tourists. Located on the south-east of the country cities are visited by large number of tourists from Russia. Many Russian tourists come to this region for only one day (many for shopping).

Lakes region of Finland (The Lakeland) is wary popular among tourists. Residents and tourists from different countries like to spend vacation here. Here are located cities Savonlinna, Mikkeli, Lappeenranta, Imatra.

Northern Finland, Lapland, attracts tourists with its unique nature. In winter, you can see the Northern Lights (or Aurora Borealis). The residence of Santa Claus is located here. It is wary popular place with tourists from many countries.

Approximately half of the visited Finland in 2012 tourists stayed in hotels. Approximately 45% of the tourists do not use the hotel facilities. Approximately two-thirds of Russian tourists make day trips and return to Russia on the same day (or in transit to another country). On average, foreign tourists spent in hotels in Finland 4 nights.

Foreign tourists spent on average in Finland 59 euros per day in 2012. The largest amount of money was spent by tourists from Japan (EUR 126 per day) and Russia (EUR 120 per day).

Countries from which to Finland came the greatest number of tourists (million, 2012).

Finland has roughly the same number of residents as the nearby Russian city St. Petersburg. Hence residents of St. Petersburg and Moscow see Finland as a small, quiet country in which is possible have a good weekend or holiday. Here you can relax from the bustle of business life in big cities. Many Russians are coming here to ski or visit the Santa Claus Village in Lapland in winter. Spa-hotels and water parks are also very popular among the people from Russia.

Residents of Finland also like to travel. The greatest number of trips is domestic tourism, travel within their own country. The largest number of foreign trips is made in neighboring countries: Estonia, Sweden and Russia. Most often it is a short trip, lasting from one to three days. Among the most popular among residents of Finland countries also are Germany, Britain and France.
The most popular country for a summer holiday is Spain (including the Balearic and Canary Islands), Greece, Turkey and Italy. Wishing to take a dip in the warm sea and spend a vacation in a warm climate in winter often choose the Canary Islands and Thailand.