Metro stations “Ploschad Vosstaniya” and “Mayakovskaya’ are located in the central part of St. Petersburg, in the eastern end of the “Nevsky Prospekt” street. Near these stations are located such objects as the “Moscowsky vokzal” railwaystation, shopping centers “Gallerya” anad “Nevsky Centre”.
“Ploscad Vosstania” and “Mayakovskaya” metrostations form interchange hub between “Kirovsko-Vyborgskaya” and “Nevsko-Vasileostrovskaya” metro lines.

The metro station is located at the intersection of “Nevsky Prospekt”, “Ligovskiy prospect” and “Vosstaniya” streets. The station has exits to the “Moscovsky voksal” railway station and to the ground lobby on the edge of “Vosstaniya” square.

Station lobby is located in the northwestern part of the “Vosstaniya” Square, opposite the Moscow railway station, between “Ligovsky Prospect” Street and the Vosstaniya street. The station also has access to the Moscowsky Railway Station (on the territory of the “Moscowsky vokzal” is also metro lobby).
The station has transition to trains of “Nevsko-Vasileostrovskaya” line. To get to the “Mayakovskaya” metrostation (Nevsko-Vasileostrovskaya line) is possible by the escalator (located in the center of the hall) or through a tunnel. 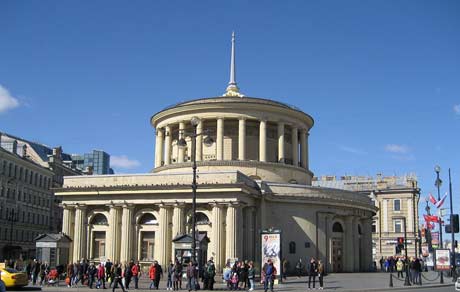 Mayakovskaya metrostation is located on the “Nevasko-Vasileostrovskaya” line (line 3, green line), between stations “Gostiny Dvor” and “Alexander Nevsky Square”. Station ground lobby is built into house located at the intersection of “Nevsky Prospekt” and “Marata” street (house number 71, opposite the “Mayakovskaya” street).

The station opened on November 3, 1967. Station underground hall is located at depth 51 meters. In the design of the station used portraits and quotes from famous poems of the poet Mayakovsky.

There are some places of interest, located near the metro stations “Ploschad Vosstaniya” and “Mayakovskaya” in Saint Petersburg: