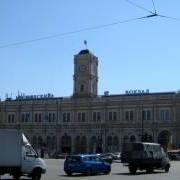 Moskovsky railway station (Moskovsky voksal, Московский вокзал) is main railway station terminal of Saint Petersburg. It is located in the central part of St. Petersburg, near city main street “Nevsky Prospekt”, on the “Ploschad Vosstaniya” square. From 1851 until 1924 the station name was “Nikolaevsky Voksal”. It is a terminus for the Saint Petersburg – Moscow Railway and other lines running from Central and South Russia, Crimea, Siberia and Eastern Ukraine.