Mon Repos Park is one of the attractions in Vyborg city. The park is located in the northern part of the city, on the shore of the Gulf of Vyborg, about 130 kilometres (80 mi) from St. Petersburg. The territory of the park is a strip of land along the shore of the bay and several small islands. Walking paths are along the coast. The territory at a distance from the shore is a virtually untouched forest on granite rocks. 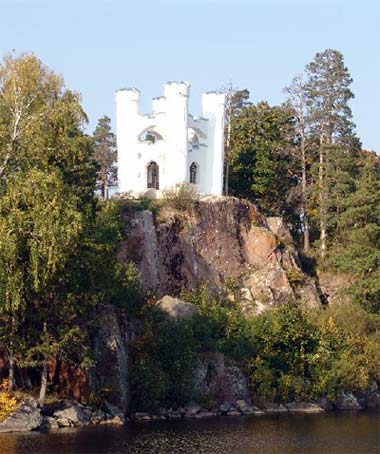 The Mon Repos park name means "my peace", "my repose" from the French word «Mon Repos». There is a wooden manor around the middle of the park. Manor breaks park into two parts - north and south. There are several buildings that adorn the park. In the northern part of the park is a spring (“Narcissus" spring). The park area is about 161.4 hectares.

The creation of the park began in the late 18th century. In 1788 the estate on the shores of the Gulf acquired Ludwig Heinrich Nicolai, who was president of the St. Petersburg Academy of Sciences. His descendants owned the park for a long time. They made a major contribution to the creation of the park. The park has visited the Russian Emperor Alexander II in 1863. At the beginning of the 20th century, the park was famous landmark and a popular holiday destination. For example, in the summer of 1926 the park was visited by 10 thousand people. The park got a lot of damage during the Soviet era. At the end of the 20th century began the restoration of the park. Finland provided assistance in the restoration of the park.

The park is one of the popular places for leisure time for residents of Vyborg now. It is a nice walk along the paths in the park in summer. In winter you can go skiing. The park is often carried out interesting activities for the public.

The park is located in the northern part of the city, approximately 3 kilometers from Vyborg Castle. It is possible to get to the park by taxi or by bus from the train and bus stations (buses №1 and №6).
Park location is shown on the map of Vyborg.
Entrance to the park is for an extra charge.