Many residents of the northern countries like to spend holidays in countries with a warm climate. In Europe, there are many countries where you can spend time holidays in the summer. But In which country is possible spend a vacation at the beach in the winter, fall or spring? There are plenty countries, where the weather is comfortable all year round. Thailand is one of the most popular countries for a vacation. A warm climate, many interesting sights and reasonable prices are waiting for tourists in Thailand. Many Europeans come to Thailand on vacation and stays there for the whole winter.

Thailand (Kingdom of Thailand, ประเทศไทย) is located in Southeast Asia, in the southwestern part of the Indochina Peninsula and the northern part of the Malay Peninsula. The nearest Thailand neighbors are Cambodia, Laos, Vietnam (in the east), Myanmar (west) and Malaysia (in the south). The country was called Siam until 1939. You can see Thailand location on the World tourist destinations map. 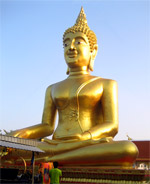 Population of Thailand is more than 70 million people, most of whom are ethnic Thais. Most Thais are Buddhists. In Thailand also live Lao, Malay, Chinese, Vietnamese and other nations.

Thailand length from north to south is about 1860 kilometers. The coastline of Thailand is produced by two seas: the Andaman Sea of the Indian Ocean (west coast of the Malay Peninsula) and the Gulf of Siam (South China Sea).

Andaman Sea is often called as the most valuable natural resource of Thailand. There are the best resorts of the country, located on Andaman Sea: Phuket, Krabi, Ranong, Phang Nga, Trang.

Nearly 30 million foreign tourists visited Thailand in 2015. Many linger here for a long time, as the climate is favorable for habitation, and the prices are much lower than in Europe and the USA. Thailand's capital city, Bangkok is one of the most popular tourist cities in the world, along with Paris, London, New York and Hong Kong. The most popular tourist destinations in Thailand are Bangkok, Pattaya, Phuket and Koh Samui.

The largest number of tourists comes to Thailand from China, Malaysia, Russia and Japan. Among Western European countries in the first places as tourist source are Germany, Britain and France. Many tourists come to Thailand also from the United States. Approximately 55% of the tourists coming to Thailand come back here again.

Many ratings and tourist publications called Thailand as one of the most attractive tourist countries in the world. Thailand's tourism industry is experiencing increasing competition from the nearest neighbors: Laos, Cambodia and Vietnam.
The best, comfortable weather at resorts in Thailand is in the period from December to March. At this time the weather on European resorts is pretty cool. This makes Thailand a particularly good place to spend winter holidays. Many retirees from European countries like to spend the winter here.

Thailand has a fairly large size and the climate in various regions of the country is significantly different. Talking about the weather in the central and northern parts of Thailand, year is often divided into three seasons: dry and cool season from December to March, the hot season from March to May and the rainy season from May to November. Air temperature throughout the year is quite high.

Weather in southern part of Thailand (where are located many resorts) has significant differences.

Most tourists concurs that the best time for a holiday in Thailand is from December to March - April. At this time, in most countries of the northern hemisphere is the cold weather, and it is possible to enjoy the good weather and swim in the warm sea in Thailand. But also other time of the year in Thailand offers good conditions for holidays.

Most Popular Destinations in Thailand

The city of Bangkok, capital of Thailand, is one of the most visited cities in the world. It is the largest city of Thailand. The city has many attractions and interesting places for tourists. The largest numbers of tourists coming to Bangkok are from China, Indonesia, European countries and the USA. Many foreign tourists also visit other regions of Thailand (including resorts in the south part of the country). Bangkok International Airport is one of the largest airports in the world.

Phuket Island is located in the southern part of Thailand, on the west coast in the Andaman Sea (Indian Ocean). It is the largest and most popular with tourist island of Thailand. Length of the island from north to south is about 50 kilometers. Most of the beaches are located on the western and southern coasts of the island. Near the Phuket Island are located many other, smaller in size, popular with tourists’ islands. The rainy season stretches from May to October. The island is connected to the mainland by two bridges. Phuket has an international airport.

Koh Samui Island is located in the Gulf of Thailand. It is the second largest island in Thailand. The island is located at a distance of about 700 kilometers from Bangkok and 40 kilometers from the coast. The rainy season stretches from May to December (most precipitation falls in October, November and December). The island has a number of good beaches. The island is popular with divers. There is an airport on the island. Koh Samui also has a ferry connection to the mainland.

Pattaya City is located in the south-east of Thailand, on the eastern coast of the Gulf of Thailand, approximately 165 kilometers from Bangkok. This is the most popular resort town of mainland Thailand. Most rainfall occurs in May and September-October. The dry season lasts from December to March. Much part of the coast in the resort is busy beaches. On the central resort beaches (central beach and Jomtien Beach) are many tourists, the water may not be enough clean. It is believed that the best beaches are located on the island of Koh Lan. There are many interesting places for tourists near the city of Pattaya. Pattaya has a bus service to the city of Bangkok.

Unfortunately, many beaches in Thailand do not have enough usual for the beaches of Europe and Turkey equipment (changing cubicle, shower with fresh water, toilets, rubbish bin).