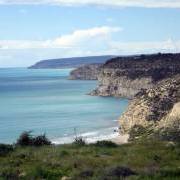 Cyprus is one of the most popular tourist destinations in the world. Cyprus is one of the favorite places for tourists from many European countries. Limassol, Paphos, Larnaca, as well as the resort towns of Ayia Napa and Protaras are the most popular tourist cities of the island. The period from April to October is the best time to spend holidays in Cyprus, but many tourists come to the island also in winter. Not only warm weather, the Mediterranean Sea and beaches attract tourists. Cyprus has many historical and natural sights, as well as sports facilities (golf, tennis). For lovers of nightlife in the resort towns there are bars, restaurants and nightclubs.

The climate of Cyprus

Cyprus has a subtropical climate, Mediterranean and semi-arid type (in the north-eastern part of the island), with very mild winters (on the coast) and warm to hot summers. Cyprus is a sunny island. According to statistical data here is from 300 to 330 sunny days per year. In winter the average temperature is +15°C, summer average temperature is +30°C. The Cypriot climate is considered as one of the healthiest in the world. Snow falls in Cyprus only in the Troodos Mountains in December and April. It is enough for alpine skiing. Rain happens from late October to April. Cyprus is good place for holidays at any time of year. The most comfortable times for tourists are in spring (April, May) and autumn (September - November). Many tourists visit Cyprus also in the winter. At this time in the cities are fewer tourists, weather is not so hot, and prices at this time is much lower.

Where to go on vacation in Cyprus?

Which city to choose for a holiday in Cyprus? It is believed that the resort towns of Protaras and Ayia Napa located in the eastern part of the island are more suitable for beach lovers. In winter, few tourists come here. Located to the west of the city of Paphos and Limassol are considered more interesting for those who are interested in culture, history, some sports (golf and tennis). In these cities there are also a good number of good beaches. It is often recommended that Ayia Napa is more popular with young people and lovers of nightlife and entertainment. The nearby Protaras is also recommended for families with children. But you can have a great holiday in any of the cities of Cyprus.

Cyprus is the island with a rich history 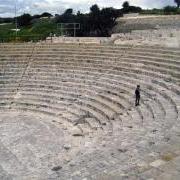 The history of Cyprus is closely linked with the history of our civilization. The island has played a prominent role in ancient times. There had to leave their traces ancient Greeks and Romans, and other known from school history lessons nations.

The first traces of civilization in Cyprus are more than 9,000 year old. An important stage in the history of Cyprus is Greek colonists settling on the island in the XII-XI centuries BC (about 3000 years ago). The influence of this period is largely determined today's appearance of the island. Greek language, art, religion and traditions have been brought during this period. In ancient times, Cyprus was famous for its copper deposit and forests (it is assumed that the island name comes from the metal cuprum name. That's what makes him the object of aspirations powerful states of the Mediterranean. Assyrians, Egyptians, Persians conquered the island and in turn owned it. In the 333-m BC it won (or released) Alexander the Great. Britain has long an influence on life in Cyprus.

Tourism is one of the main sources of income in Cyprus. Cyprus Tourism Organisation (CTO) is engaged in the tourism industry operating. Industries related to tourism employs considerable part of population of Cyprus. Among coming to Cyprus tourists largest parts are citizens of the UK and Germany.

Average air and water temperatures in Cyprus (by month).

The city of Limassol is located on the south of the island of Cyprus. It is the second largest city in the country. The city's population is about 235 thousand people. Limassol seafront is a popular place among tourists. Limassol carnival and Wine Festival (held in early September) can be considered as the most popular city events. The most famous attraction near Limassol may be considered Kourion, which has a well-preserved amphitheater. Paphos city is located to west of Limassol, Larnaca and Ayia Napa to east.

Paphos (Πάφος) is located in the southwestern part of the island of Cyprus. Resident population of the city is about 36,000 people. There are many attractions and beaches near the town. Near the town is a place, which according to legend, is considered as the birthplace of the Greek goddess Aphrodite. Paphos is included in the World Cultural and Natural Heritage list. Near the town is an international airport.

Larnaca (Λάρνακα) city is located in the southeastern part of the island. It is the third largest city in Cyprus. there is a small salt lake, on which live flamingos in winter, near the city. Near the town is an international airport.
Learn more about Larnaca.

Ayia Napa is a small resort town. The resort is located in the southeastern part of the island. Close to Ayia Napa are the best beaches in Cyprus. The city has many restaurants and nightclubs. It is believed that Ayia Napa is the best place for a holiday for young people in Cyprus. Fans of nightlife and entertainment called Ayia Napa as "New Ibiza".

Famagusta city is located in the Turkish Republic of Northern Cyprus. The city's population is about 50 thousand people. International Festival of Arts and Culture is held every year in Famagusta. Concerts, dance shows and theater performances are held during the festival. 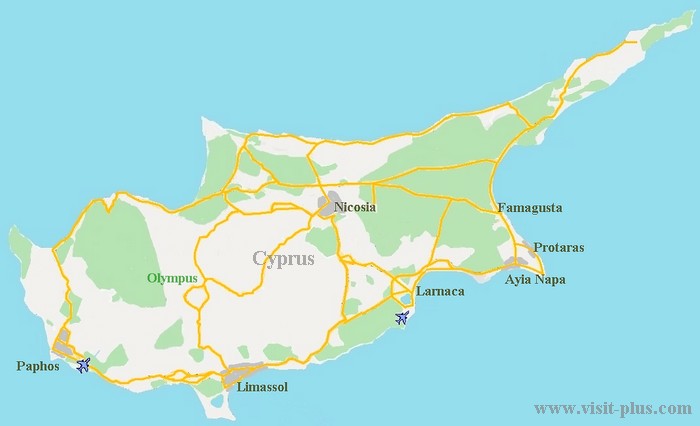 Petra tou Romiou ("Rock of the "Greek"") also known as Aphrodite's Rock. It is located off the shore along the main road from Paphos to Limassol.

Paphos Archaeological Park. Archaeological open-air museum is located in the city of Paphos, next to the harbor. It is known for its well-preserved mosaics dating back to ancient Rome.

Paphos Castle (Κάστρο της Πάφου). The medieval castle is located next to the harbor in Paphos.

Saint Neophytos Monastery (Ιερά Μονή Αγίου Νεοφύτου). It is one of the best-known monasteries in Cyprus and museum. It is located 15 km west of Paphos.

Church of the Icon of the Mother of God of Chrysopolitis (Ιερός Ναός Παναγίας Χρυσοπολιτσσης). The church is located in the city of Paphos. Archaeological excavations are located near the church.

The medieval castle of Limassol. The castle is located near the old harbor in the city center of Limassol. This is one of the ten castles of Cyprus. It is assumed that Richard the Lionheart married his bride, Princess Berengaria of Navarre, in this castle.

Kolossi Castle. The castle is located on the southwestern edge of the village of Kolossi, 14 kilometers (9 miles) west of the city of Limassol.

Khirokitia (Χοιροκοιτία). This is a settlement of ancient people that existed in the VII — IV millennium BC. er (Neolithic era.). It is located near the F1 highway, approximately between Larnaca and Limassol.

Famagusta Castle. The castle is also known as Othello Castle (Othello Tower). It is located in the city of Famagusta, in the territory of the Turkish Republic of Northern Cyprus.

Salamis (Σαλαμ). The ancient city, which is located about 6 kilometers north of modern Famagusta.

Curio (Κούριον). It is antique city, which is located near the city of Limassol. The city has a well-preserved ancient theater.

Olympus (Όλυμπος). The highest mountain on Kmpre (1952 m). The ski center operates on a mountain in winter.

You will find the location of most of the attractions on the map of Cyprus.

The air travel (flight) distance between Cyprus and some cities:

Larnaca Airport. The airport is located about 4 kilometers to the southwest of the city of Larnaca. The airport serves a large number of arriving on the island tourists. The airport handled 4.8 million passengers in 2013.

Paphos Airport. The airport is located at a distance about 6.5 kilometers from the town of Paphos. This is the second by the number of passenger’s airport on the island. The airport has a bus service to the towns Paphos, Limassol, Nicosia.

Ercan Airport. Also known as Lefkoşa (Nicosia) Airport. The airport is located in the Turkish part of Cyprus island, at a distance approximately 13 kilometers from Nicosia. The airport serves the aircraft following on the routes of Cyprus - Turkey.

Cyprus has a wide range of hotels, apartments and villas, from luxurious to affordable. So you can find a suitable place to stay. Most hotels have a category of three, four and five stars.

The main part of tourist accommodation is made up of large resort hotels and resort villages with a full range of services. Most hotels are located in Ayia Napa, Protaras, Larnaca, Limassol and Paphos.
Also in the cities there are quite a few apartments that can be rented for the term you need. Some tourists prefer to rent a villa. It is convenient for living by a large family or company.
The island also has several campgrounds where you can spend the night in your tent. (For example: Polis Chrysochous Campsite, Platania Campsite, Governor’s Beach Kalymnos Campsite, Troodos Campsite.)

You probably know how to choose the right hotel for you. You should pay attention to the location, number of stars and cost of living. Read reviews from tourists can also be very helpful.

Links to the best accommodation booking sites can be found here. Look here for a golf resort in Cyprus.

Cyprus is situated in north-eastern Mediterranean at a distance of 380 km from Egypt, 105 km from Syria and 75 km to south of Turkey. The total area of the island is 9,251 square kilometer. Geographically, the island of Cyprus belongs to Asia. Dimensions of the island of Cyprus: length from east to west - 240 km, from north to south - 100 km. The coastline of the island in the north is curved and rocky, while the south coast has many long sandy beaches. For this reason, almost all resorts are located in the south of Cyprus. The total coastline of Cyprus is 780 kilometers.
A large mountain range “Troodos” is located in central and south-western parts of Cyprus. The highest pint of the island is Olympos mountain (Hionistra, height 1,951 m.), in which from January to March, operating winter sports centers.
Cyprus map.

Cyprus is the third largest island in the Mediterranean. It is located south of Turkey, west of Syria and Lebanon, northwest of Israel, north of Egypt and east of Greece. Currently the island is divided into some parts: 36% of the island is under control of the Turkish Republic of Northern Cyprus, 3,7% - the United Nations (buffer area), 2.7% - United Kingdom (military bases), the rest is under control of Republic of Cyprus (about 36% of the island's area).

See the island location on the world destinations map.