The United States of America

The United States of America is one of the largest countries in the world, both in terms of territory and in terms of population. US citizens like to travel. The United States is also the second most visited by foreign travelers’ country in the world (after France). On this page you will find information for travel enthusiasts, which may be of interest to both Americans and foreign tourists.

Many of us like to travel. We travel on weekends and on a longer vacation, by airplane, by ship, train and car. We go to other cities and countries for our own pleasure and business. Information for travelers is on this site.

A huge and diverse USA territory provides great opportunities for travel. The main US territory is located on the North American continent. The US territory is washed by the Pacific Ocean on the west and - by the Atlantic on the east. US border with Mexico in the southern and with Canada in the north. In addition to the main territory, the United States also includes Alaska and the Hawaiian Islands.

There are all climatic zones in the US. Alaska is located in the Arctic climate zone. The climate is tropical in the state of Hawaii and in the south of Florida. There are mountains and plains, large lakes and rivers on the territory of the country. 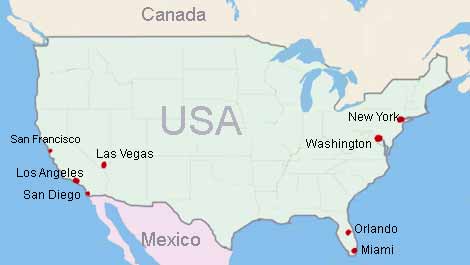 The map shows the territory of the USA (without Alaska and Hawaii).

According to the information published in the Internet, California is the most popular destination for US residents. Tourists are attracted in the state by a good climate, great beaches and opportunities for surfing, theme parks, Hollywood, as well as wine and food producers. The most visited cities here are Los Angeles, San Francisco and San Diego.

The state of Florida is also a popular place for holidays, both for US residents and for foreign tourists. A warm climate attracts residents of the northern states of the country. The city of Orlando is also famous for its theme parks.

According to statistics, the most popular cities among US residents are Orlando, Las Vegas, San Francisco, New York, Miami, Los Angeles, Anaheim and San Diego.

The location of some of the most popular cities and places in the US you will find on our World Map.

Foreign tourists in the US

Foreign tourists in America are mostly interested in the same places as local tourists, but they are less interested in the history of the country. The United States has a relatively short history, compared, for example, with Egypt, Greece or Italy.

According to polls, foreign tourists like spending time in the US, doing shopping, sightseeing, visiting restaurants, visiting national parks and having fun in theme parks. Foreign travelers help to support over one million jobs in the United States.

The largest number of foreign tourists comes to the US from Mexico and Canada. America is a popular destination also for tourists from Great Britain, France, Italy and Germany.

Some of the most visited places in the USA:

Did you know that electrical outlets in the US (and Canada) are different from those used in Europe and most Asian countries? The electrical adapter is better to buy in advance. This is especially true for tourists traveling from the US to Europe.