Hotel "National" (Отель «Националь») is the oldest hotel in Moscow. It is also one of the best hotels in Moscow. The hotel is located in the very center of the city, at a distance of 300 meters from the Kremlin and Red Square, at the intersection of the famous Tverskaya and Mokhovaya streets. The five-star National Hotel is the only hotel of the The Luxury Collection in Russia (2019). (The brand is owned by the Marriott International hotel chain.)

It is not only very convenient, but also prestigious, to live in the hotel "National". It may also be important for some travelers. 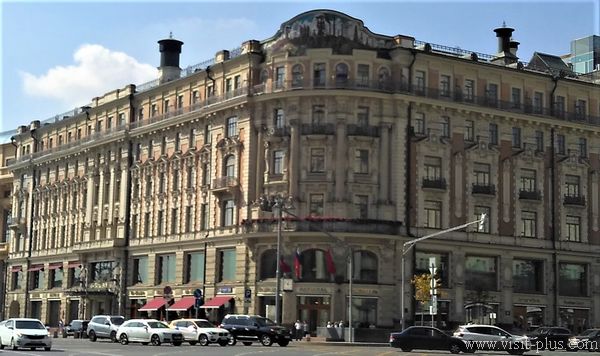 The National Hotel was opened on December 29, 1902. This is the oldest operating hotel in Moscow. (Hotel Metropol can also be considered the oldest, if we take into account the hotel that was previously in its place.)

The hotel was built for famous and wealthy travelers. It still remains one of the best hotels in the city as well. Many famous people chose this hotel to stay in Moscow, but the hotel does not want to disclose their names.

The hotel has both classic single and multi-bed rooms, as well as luxury rooms for the most demanding customers. Some rooms have a view of the Moscow Kremlin. Presidential Suite is sure to suit those guests who have the highest requirements for comfort.

You can find out the cost of living, availability of rooms and get acquainted with the reviews of tourists on the BookingCom website.

The hotel also has restaurants, a swimming pool, and rooms for events.

Address: Mokhovaya Street, 15/1, p. 1, Moscow.
The nearest metro station: Okhotny Ryad.
You can see the hotel location on the map.