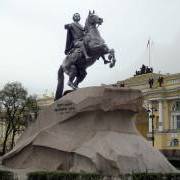 The most famous monument to Tsar Peter the Great in St. Petersburg is located on the Senate Square. It is also well known under the name "The Bronze Horseman". The monument is located on the embankments of Neva River, not far from St. Isaac's Cathedral. "The Bronze Horseman" is one of the symbols of the city and one of the main attractions of St. Petersburg. This place is very popular with residents and tourists. All tourists are certainly coming here. The newlyweds come here to take pictures of the monument background. In Russian the monument name is written as "Медный всадник" (Медный всадник).

Equestrian statue of Peter the Great was made by sculptor Etienne Falconet. The contract with the sculptor was signed in 1766. A variety of options for the monument were offer, but the sculptor made the monument in its sole discretion. Prepare the full size plaster model of the monument took twelve years. It was ready in 1769. The sculptor could not find a master for a long time, which could cast the statue. The casting of the statue was completed in 1778. Granite stone for pedestal was found near St. Petersburg and brought to the Senate Square. The monument was officially opened on August 7, 1782. It was the first equestrian statue of Russian Tsar.

Monument to Peter the Great has turned out very successful and popular among the city residents. Poet Alexander Pushkin called one of his poems (the plot was linked to the monument), "The Bronze Horseman" in 1883. Due to the popularity of his work, the statue came to be called the "Bronze Horseman".

There are also located near the monument "The Bronze Horseman" in St. Petersburg: Palace Square, Admiralty, St. Isaac's Cathedral, the «For Seasons» hotel.