In the west of the United States, on the Pacific coast, in the south of the state of California is a city that annually attracts millions of tourists. Dreams of a happy life, glory and wealth of many people from different countries of the world are directed here. This city is Los Angeles.

Los Angeles is the second largest city in the United States and the largest city on the west coast. The warm climate of southern California and good beaches create good conditions for a summer vacation. Here are several world-famous museums. Cinema lovers and those who want to become famous actors are attracted to Hollywood. Not far from the city is also "Disneyland" and Universal Studios Hollywood (in the neighboring city - Anaheim).

Distance from Los Angeles to some cities and airports in the United States. (Distance by air.)

The city occupies a large area. The maximum length from north to south is about 70 kilometers, from east to west - 45 kilometers. Los Angeles is the center of a large, urban agglomeration. Greater Los Angeles stretches nearly 200 kilometers along the ocean shore. About 18 million people live here. Tourists who come here are often traveling to Mexico (via San Diego) and Las Vegas.

The most famous areas

The city is divided into more than 80 districts and neighborhoods, some of which are independent cities that have merged with Los Angeles. You will find some information about the most popular areas and suburbs here.

Downtown Los Angeles is a business district of the city. Most of the city's skyscrapers are located here. Despite the fact that most tourists rush to other areas of Los Angeles, there are also many interesting places. Union Station is located in the north-east of the district.

Beverly Hills is one of the most famous areas of Los Angeles. This is a prestigious neighborhood in which many famous musicians and Hollywood actors have their homes. The most luxurious mansions, as a rule, are located higher in the hills and hidden from prying eyes. The chance of meeting your favorite actor here on the street is close to zero.
Most of the area’s expensive shops are located near Rodeo Drive.

There are no subway station in Beverly Hills.
From Union Station, take the PURPLE Line Metro Rail Train to the "Wilshire/Western" station. Take the #720 bus which will travel along Wilshire Blvd to Beverly Hills.
The best way to get to Beverly Hills from the airport is by taxi or a rented car.

Hollywood is a district of the city that most tourists coming to the city want to visit. Most tourists want to see the Hollywood Walk of Fame and take pictures next to the movie stars. Walk of Fame is a stretch of Hollywood Boulevard and Vine Street. More than 2500 stars with celebrity names are mounted in the pavement here.
Hollywood Boulevard also houses the famous Kodak cinema, which hosts the Academy Awards event.

Hollywood/Highland and Hollywood/Vine (Red Line) metro stations are located within walking distance of many important landmarks, including The Hollywood Walk of Fame.

West Hollywood is located between Beverly Hills and Hollywood. There are many restaurants, shops and art galleries. The most popular place for walking is the Sunset Boulevard part, which has the name Sunset Strip.

Venice town is located in the western part of Los Angeles, on the coast of the ocean, at a distance of about 6 kilometers north-west of the LAX airport. A similar to Italian Venice place was attempted to create here at the beginning of the 20th century. Plans failed to implement. It is a popular tourist destination, the coastal area of Los Angeles with lots of fun and a great beach now.

Santa Monica is a city in the United States, located in the west of Los Angeles County, on the ocean coast, west of the Venice area. The beach is the main tourist attraction of the city. There are several museums in Santa Monica too. Next to the Santa Monica Pier is the popular Pacific Park amusement park located.

Best ways to get from LAX to Santa Monica: take a taxi; take the free shuttle bus from the LAX terminals to Parking Lot C and board Bus Route 3. Downtown Santa Monica is a light rail station in the Los Angeles County Metro Rail system. It is located near the intersection of 4th Street and Colorado Avenue.

Malibu is a small resort town in the west of Los Angeles County, west of St. Monica. It occupies a narrow strip about 30 kilometers long along the ocean coast. The main attraction of the city is sandy beaches.

Long Beach is a city in the southern part of Los Angeles County, on the Pacific coast, 30 km from downtown Los Angeles. One of the largest in the United States container ports is located here. In Long Beach there is the only beach in the Los Angeles, where dogs are allowed. There are reviews that the water here is not very clean. 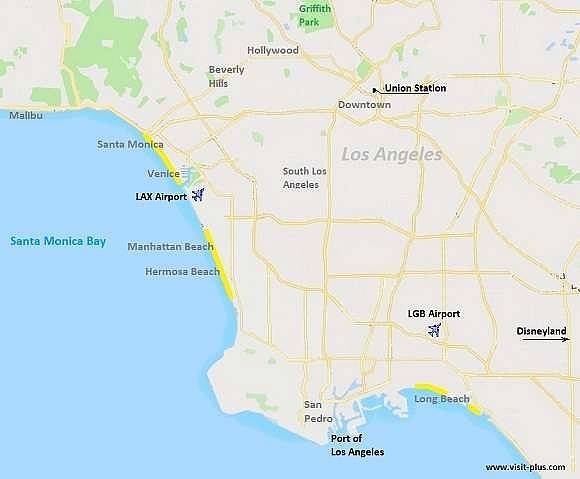 There are several airports near Los Angeles.

Los Angeles International Airport (IATA: LAX) is the main airport of the city. This is the fifth largest airport in the world. The airport is located 16 kilometers from downtown Los Angeles. The international code LAX is often used instead of the full name of the airport.
Passengers can leave Los Angeles airport by various means of transport: the MTA city bus, the FlyAway express bus, the subway, a taxi, a rented car. (Aviation Station / LAX Metro Station can be reached by a free shuttle from the airport. Aviation / Century Station will be opened in 2019.)

How to buy tickets to Los Angeles at the best price? The most effective method is to start looking for flights in advance. We recommend starting to compare prices from different airlines as soon as you know your travel dates. You will find flights and a calendar of the best prices here.

You can see the lowest prices for flights to Los Angeles here.

The routes of four Amtrak long-distance trains begin and end here. The station also serves many regional trains. By rail you can get, for example, to the cities: Seattle, Chicago, New Orleans, San Diego, Santa Barbara.

Union Station is located in the northeastern part of downtown Los Angeles, on the territory bounded by Alameda Street, Cesar Chavez Avenue, Vignes Street and El Monte Busway. Station location: 25 kilometers east of the Santa Monica and Venice areas, 20 kilometers northeast of the airport and 30 kilometers north of Long Beach.
There are stations of several metro lines at the station.

The Long Beach Cruise Terminal is operated by Carnival Corporation. It is located 23 miles from Los Angeles International Airport.