Marmaris is located on the shores of the bay, which is protected by the islands from the open sea. Therefore, big waves are less common here. The length of the city along the coast is about 4 kilometers. The permanent population of the city is about 30 thousand people, but at the peak of the tourist season, up to 300 thousand people live in the city.

Distance from Marmaris to some cities:

Dalaman Airport (IATA: DLM) is located at a distance of 95 kilometers (on the highway) east of Marmaris. You can get to Marmaris from the airport by bus. Bus parking is located at the exit from the domestic airport terminal. Travel time is approximately 70 minutes.
You can also order a taxi

. Transfer by taxi is much more expensive, but it is more convenient if you have a lot of luggage, traveling by company or with children.

The monument to the first president of Turkey (Mustafa Kemal Atatürk), Atatürk Statue, is located in a small square on the seashore in the very center of Marmaris. This place can be considered as a starting point for exploring the city.
- The yacht harbor, Marmaris Castle and Bar Street are located east of the square.
- You will come to the square 19 Mayıs Gençlik Meydanı and to the dancing fountain, if you go deep into the city from the monument.
- To the west of the monument there are: a small park, a city beach, an aquapark, the Long Beach and further (after 8 kilometers) the resort village of Ichmeler.

The embankment is the place that almost all tourists visit. Embankment is a place where it is good to walk in the morning or in the evening (when it is not too hot). The embankment stretches across the city, from east to west, from the yacht port, along the beaches and further to the resort town of Ichmeler.

Restaurants and hotels (which are located in the western part of the embankment) often invite artists and arrange shows themselves to attract customers. Come for a walk after sunset.

The promenade (pedestrian street) stretches from Marmaris to Ichmeler and has a length of about 10 kilometers. 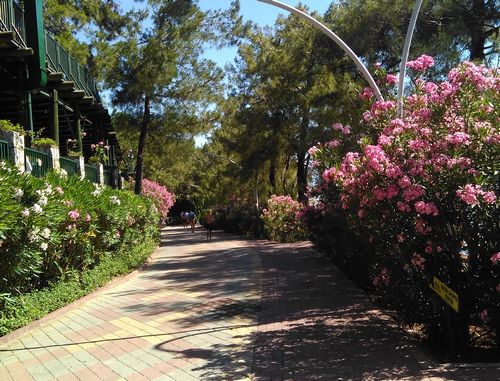 In the photo: a path from Marmaris to Icmeler.

Marmaris Castle is located in the city center, near the harbor. This is one of the few medieval castles in Turkey. Currently, there is a museum in the fortress. The exposition of the museum is probably not very large, but the castle offers a beautiful view of the sea and the city. You can make beautiful photos.

You can walk to the fortress along a narrow street in the Old Town (behind the grand bazaar). 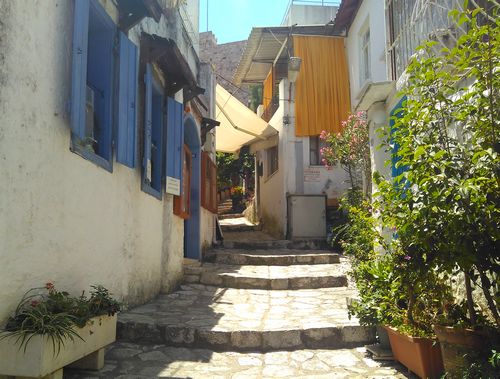 This street in the old town leads to the fortress (museum).

Dancing Fountains (The light and music fountain) is one of the attractions of the city. It is located in the city center, at the intersection of Ulusal Egemenlik Caddesi and Orgeneral Mustafa Muğlalı Caddesi, about 200 meters from the embankment. Light show usually takes place in the evening, at 21 or 22 hours.
Recommended to see by VISIT-PLUS.

Bar Street is one of the places most visited by tourists. On the street of bars there are restaurants, clubs, discos and other places of entertainment where nightlife lovers like to spend time. The street of bars is located in the center of the city, near the marina (39 Sokak street).

This is a small, dark, unremarkable street. You will not lose anything if you do not come here.

The resort town of Icmeler (İçmeler) is located at a distance of 8 kilometers west of Marmaris. The permanent population of the town is about 9000 people, but this is without tourists. (The distance from the eastern part of Marmaris to the outskirts of Icmeler is about 4 kilometers.) Icmeler is known for its excellent beach. There are not so many restaurants and clubs, as in Marmaris. This place can be recommended to families with children. Icmeler can be reached from Marmaris by bus, by sea or even on foot (if you like walking). 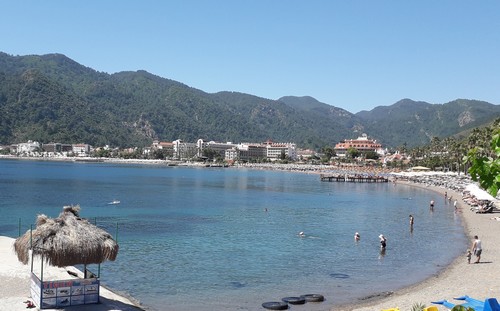 On the photo: view of the village Ichmeler.

Atlantis Waterpark is located on the seafront, near the beach. If you are not interested in simply lying on the beach, you can buy a ticket to the water park. The water park offers entertainment for visitors of all ages: water slides, a children's pool, a wave pool, mini golf, bowling, a bar. The ticket price also includes sun beds, umbrellas and WI-FI on the beach by the sea for the whole day.

Marmaris is quite suitable for beach lovers as a summer holiday destination. In Marmaris and near it there are several beaches, which are located both in the city center and nearby. The beaches are mostly sand and pebble.

Marmaris Urban Beach is located in the center of Marmaris. The beach stretches from the yacht harbor to the west and is served by municipal services. You can find a toilet, shower and changing rooms on the beach (for free). Vacationers can stay on any free space right on the sand. There may be a lot of tourists on the beach at the peak of the tourist season.
The length of the beach is about 550 meters. 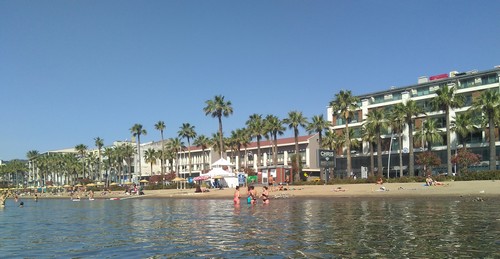 Look at the pictures of the city beach in Marmaris. 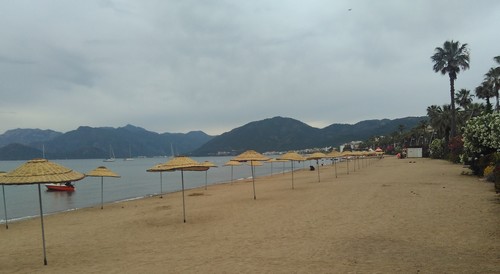 The beach is mostly sandy, but there are stones in some places along the coast. The bottom is gently sloping in the sea.

Uzunyali Beach, also known as Long Beach, is also located in the city, west of the city beach. Long Beach stretches along the coastline in the direction of Ichmeler. Along the beach there is a pedestrian promenade. There are many hotels and restaurants.

The beach is serviced by hotels and restaurants that divide the beach into areas and offer sun beds and umbrellas to their customers. They also care about the purity of the sand.

Information that sun beds and WI-FI are provided free of charge is available near many beaches. But in fact, you need to buy something (drink) in a cafe (restaurant) to get a place on the beach for the whole day. The length of the beach in the city is about 3 kilometers.
(You can also sunbathe on the sand if you can find free space.) 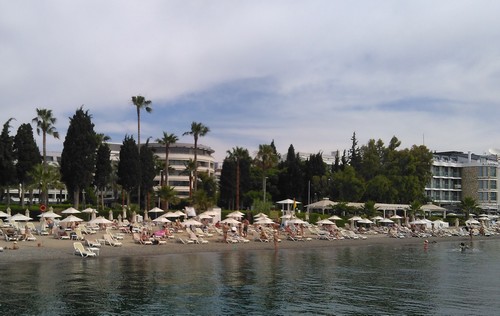 Pebbles and small stones are at the bottom in the main. Restaurants and hotels deliver sand to their beach areas

Icmeler Beach is located approximately 6 kilometers west of the city of Marmaris. There are usually fewer people, and the water is cleaner. If you like to spend holidays in a quiet place (far from the crowd of vacationers), then you should choose a hotel in the village of Ichmeler. You can get here by bus, or by boat (as well as on foot). Icmeler Beach can also be more convenient for families with children.

There is also a nice, sandy beach near the village, but you have to pay for a deck chair.

Turunc Beach (Turunc Sahil) is located at a distance of approximately 21 kilometers from the central part of Marmaris. This is a good beach, marked by the Blue Flag for its cleanliness. You can get to the beach by bus or boat.

Cleopatra Beach is located on the Sedir island (Sedir Adası), at a distance of 16 kilometers from the central part of Marmaris. It is considered as one of the most beautiful in the region. You can buy a boat trip to Sedir Island (Cleopatra Island) in the port or on the Internet.

It must be borne in mind that on those beaches where turtles lay eggs, people's access may be limited in early summer.

Tourists often use buses to get around the city in Marmaris (in Turkey). Local type of transport is a minibus called Dolmuş. Buses have several routes. Buses of different routes differ in color.

Information about dolmushes (departing from the city center, from the square with a fountain).

Important information. New buses may have several lanes of different colors. They can follow any route. Look at the information board and inscriptions on the bus.

In the photo: this bus runs along the street parallel to the embankment.

You can also take a taxi.

Intercity bus station (Otogar) is located in the north-east of the city. You can go to many cities in Turkey from the bus station. For example, from here buses go to: Bodrum, Kusadasi, Antalya, Istanbul and others.
Address: Sarıana Mh. 48700 Marmaris / Muğla.

Choose the right place for your holiday

Different people have different preferences when choosing a hotel and area of the city. Someone likes to live closer to the city center and closer to entertainment, someone prefers quieter places. Tourists with any requests can find a suitable hotel for themselves in Marmaris.

In Marmaris, as in other cities, many excursions are offered to tourists.
Among the sea tours are offered: fishing trips, diving, trips to various islands. You can also go to the Greek island of Rhodes.

There are many points of sale of excursions on the embankment and on the main streets (English is spoken everywhere). You will surely see a lot of tourist offices during a walk along the promenade.

If you want to hire a personal guide and buy an individual excursion, then you should book the excursion in advance.

Among the most popular tours: