The Canary Islands are worldwide known as one of the best holiday destination. The Canary Islands climate attracts here tourists all year around. The islands have a subtropical climate, with long warm summers and moderately warm winters. Here never is cold. Temperatures in the Canary Islands are rarely dispensed below 15°C in winter. There is rarely too hot in summer. The water temperature is nearly constant throughout the year and does not fall below 20°C. Islands are especially popular with tourists from the north Europe countries. It is enjoyable to come here in winter, when it is snow and frost at home. 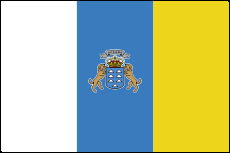 Flag of the Canary Islands

Climate and beaches make the islands a major tourist destination. Over 12 million tourists visit islands every year. Most popular islands with tourists are Tenerife, Fuerteventura and Gran Canaria.

Among the islands, Tenerife has the largest number of tourists received annually, followed by Gran Canaria. The greatest number of tourists comes from the United Kingdom. In second place by number of coming tourists are Germany, Belgium, the Netherlands, Sweden, Finland, Denmark, Norway, Italy, France, Austria, Ireland and Switzerland. Tourism is more prevalent in the southern parts of the islands, which is hotter and drier and has many well developed resorts. 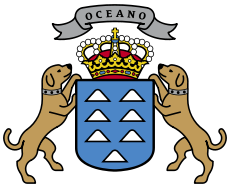 Coat of arms of Canary Islands.

Most famous attraction on Canary Islands is Teide National Park and Mount Teide (Tenerife). The Teide on Tenerife volcano is the highest mountain in Spain. The Carnival of Santa Cruz de Tenerife and Carnival of Las Palmas are one of the most famous Carnivals in Spain. It is celebrated on the streets between the months of February and March.

There are ferry boats that link islands as well as fast ferries linking most of the islands. A typical ferry ride between La Palma and Tenerife may take up to eight hours or more while a fast ferry takes about 2 and a half hours. Trip between Tenerife and Gran Canaria by fast ferries can be about one hour. The port of Los Cristianos (Tenerife) has the greatest number of passengers recorded in the Canary Islands. It is followed by the port of Santa Cruz de Tenerife.

The Canary Islands are located in the Atlantic Ocean, about 110 kilometers east of the west coast of Africa (Morocco). Administratively the island are part of Spain. Approximately in the center of the archipelago is the Gran Canaria island. Tenerife Island is located to west of and Fuerteventura to east of the Gran Canaria. You can specify the location of the islands on the map below.

Useful links for those who are planning a trip to the Canary Islands:
Find flights and buy tickets.
Book a hotel in Canary Islands.
Book a transfer (taxi, minibus) from the airport to the hotel.
English